On September 29, 2021, the EU Commission launched five new EU missions. The EU missions introduced under Horizon Europe are a novelty and an original concept in EU policy-making. They aim to address the major health, climate and environmental challenges and to achieve ambitious and inspiring goals in these areas. 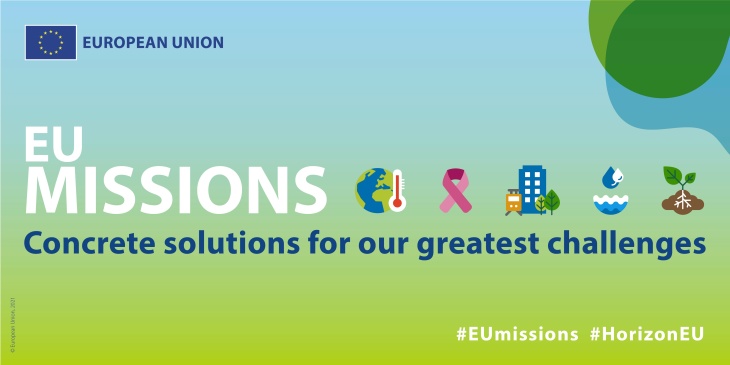 At the European Research and Innovation Days on September 22nd, 2020, high-ranking independent experts (including Daniela Jacob as an expert on the Mission Board "Adaptation to Climate Change including Societal Transformation" - see background below) presented its proposals for possible EU missions to some of our most pressing societal challenges to the European Commission. The aim of the proposed missions is to find solutions for the following topics by 2030:

With the communication on the EU missions that has now been adopted, the Commission is giving the go-ahead for the missions after having approved the individual plans in the summer.

The next steps
The implementation phase of the EU missions begins immediately. The first Horizon Europe work program for 2021-22, published on June 16, sets out a number of actions that lay the foundation for their implementation. It will be updated with a full research and innovation agenda by the end of the year. At the same time, the missions will start in the participating regions, cities and organizations as well as with the citizens of the Member States.

In August 2019 Daniela Jacob was elected to the European Commission's "Mission Board" [b]„Adaptation to Climate Change including Societal Transformation”]/b]. The Mission Boards, set up by Research Commissioner Carlos Moedas, are high-level advisory bodies for five mission areas for planning the future EU Framework Programme for Research and Innovation, Horizon Europe, and each consist of 15 experts from research, politics and society. More than 2100 people have applied for membership of the Boards in a Europe-wide process.

Daniela Jacob: "It is a very great honour for me to be a member of the Panel. At the same time, I am aware that there is a great deal of responsibility involved. For in the missions we deal with major challenges facing the people of Europe".

In the past few months, the panels have defined specific missions under the context of five areas of combating cancer, climate change, healthy oceans, climate-neutral cities and healthy soil and food. The aim is to propose specific research content to the European Commission, including concrete objectives and timetables for missions that will implement the five priorities mentioned above, which are currently only formulated in general terms, in Horizon Europe from 2021 with measurable results.