Think7 Summit in Berlin: Handover of the Think7 Communiqué to Chancellor Olaf Scholz

Daniela Jacob Co-Chair of the Task Force Climate and Environment 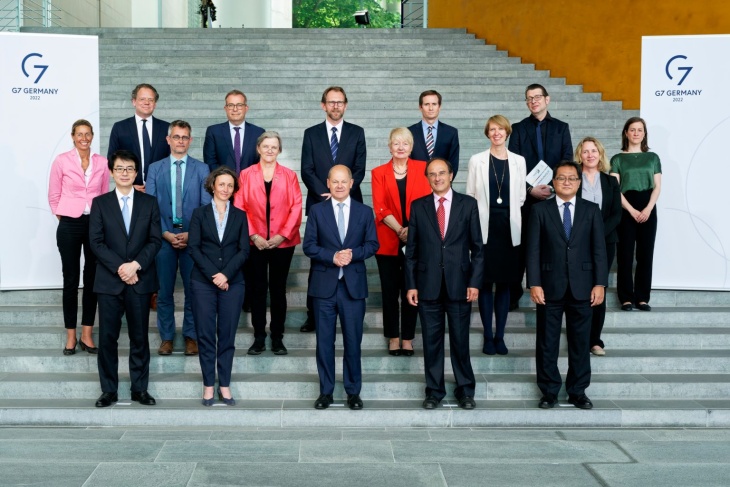 A high-level delegation led by Dennis Snower (Global Solutions Initiative, GSI) and Anna-Katharina Hornidge (German Development Institute / Deutsches Institut für Entwicklungspolitik, DIE) handed over the Think7 Communiqué to German Chancellor Olaf Scholz, as chair of the G7, on May 25, 2022. Daniela Jacob was also present in her role as co-chair of the Think7 Climate and Environment Task Force.

The communiqué summarises about 70 papers of the Think7, in which policy recommendations for the G7 summit in Elmau are made. For example, the authors argue that the G7 should work more closely with the G20 countries to counter a relapse into a polarized world and to work toward an end to the war in Ukraine. A second key recommendation is that the G7 should develop common standards for measuring human well-being that take into account not only economic criteria but also the state of the environment and social cohesion. The third central recommendation of the Think7 to the G7 is that the work of the group of states should be continuously accompanied by science and civil society in the future – until now, the composition and goals of the so-called various G7 Engagement Groups have changed with each new G7 presidency.

The Think 7 Communiqué in full

The Think7 meeting took place in Berlin on 23 and 24 May 2022. Think7 is an association of leading think tanks from the G7 countries. It works to develop and propose research-based policy recommendations to support the German G7 Presidency. The Think7 process is jointly coordinated by the Global Solutions Initiative and the German Development Institute (DIE) during the German G7 Presidency in 2022.

The Global Solutions Initiative (GSI) and the German Development Institute (DIE) will chair the Think7 group during the German G7 Presidency in 2022.

The task forces will be led by academics from research institutions and think tanks and will develop research-based policy recommendations to support the G7 negotiations in working groups and ministerial meetings in preparation for the Leaders' Summit.

The Think7 process in 2022 takes place in thematic task forces that bring together experts from research institutions and think tanks from G7 countries. The task forces develop research-based policy recommendations for G7 policymakers and G7 engagement groups. Each task force is led by three co-chairs appointed by the Think7 co-chairs. They have close links to relevant policymakers in the G7 countries and in particular in the country holding the G7 Chair. The co-chairs are responsible for leading the discussions and outcomes of their task force.

Daniela Jacob serves as Co-Chair of the Climate and Environment Task Force. The Task Force on Climate and Environment addresses a wide range of interlinked issues, including climate, biodiversity, clean water, air, land and oceans, food and agriculture, energy, and infrastructure. With a particular focus on sinks and sources of greenhouse gas emissions, job-rich equitable transitions, nature-based solutions and the 2030 Agenda for Sustainable Development, the working group has developed policy recommendations for the German G7 Presidency, especially those that will have the greatest impact on reducing climate change.

The chairs of the Climate and Environment Group (besides Daniela Jacob, these are John Kirton, University of Toronto, Director of the G7 and G20 Research Group and Lindsay Stringer, Professor in Environment and Development, University of York) have written a joint issue paper entitled "Saving the Planet".

Humans are destroying the planet through incessant greenhouse gas emissions, land-use change and pollution, leading to widespread biodiversity loss and progressive land, forest and marine degradation that undermines human health and affects agriculture and food production. These challenges can be addressed within a limited window of opportunity. G7 leaders should at their meeting in Elmau this year:

These six recommendations should be implemented in a way that supports the SDGs, creates jobs, is inclusive, promotes equality, supports gender equality, is independently monitored and continuously improved.