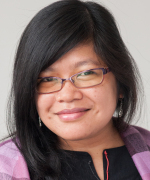 At the Climate Service Center Germany (GERICS), Dr. Armelle Reca C. Remedio is mainly working in The Future of Extreme Precipitation Events in the Alpine Region under High End Climate Change Conditions (HighEnd:Extremes) sponsored by the Austrian Climate and Energy Funds in the frame of the "ACRP 6th Call" programme. She contributes to a small ensemble of regional climate models and analyze extreme precipitation events that are simulated on convection permitting/resolving scales. As part of this international project, she derives user relevant climate indices based from these very high resolution simulations.

As part of the Climate System Department of GERICS, Armelle contributes in the WCRP Initiative on the Coordinated Regional Downscaling Experiment (CORDEX).
She also has participated in the recently concluded EU FP7 Project on Pan-European Gas-AeroSOls-climate interaction Study (PEGASOS), which aimed in quantifying the regional feedbacks between aerosols and a changing climate for the European region using the regional model REMO with aerosol module (REMO-HAM).

Armelle finished her Bachelor in Physics with Computer Engineering at the Ateneo de Manila University in Quezon City, Philippines. She worked as a research assistant in the Regional Climate Systems Group at the Manila Observatory, Philippines. She then went to pursue further studies at the Abdus Salam International Center for Theoretical Physics in Trieste, Italy and finished her diploma in Earth Systems Physics. Her dissertation was on extreme events in the Philippines.

Previously, Armelle was at the Max-Planck-Institute for Meteorology in Hamburg, where she has successfully defended her PhD thesis on the connections between low level jets and mesoscale convective systems in South America in 2013. During her PhD, she has worked in an EU FP7 Project that is CLARIS LPB - A Europe-South America Network for Climate Change Assessment and Impact Studies in La Plata Basin.