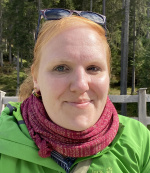 Helmke Hepach is part of the Earth League Secretariat at GERICS, providing scientific and administrative support. The Earth League is a voluntary international alliance of renowned scientific institutes and scientists working together to address some of the most pressing issues facing humanity and to advise decision-makers on sustainable development, climate change, mitigation and adaptation.

After completing her diploma studies in Marine Environmental Sciences at Carl von Ossietzky University Oldenburg, Università degli Studi di Perugia, Italy and University of British Columbia, Vancouver, Canada in 2009, she started a PhD in Chemical Oceanography at GEOMAR (Helmholtz Centre for Ocean Research Kiel). She completed her Kompass Award-winning dissertation, which focused on emissions of naturally produced halogenated trace gases from the tropical ocean, at Christian Albrechts University, Kiel, Germany, in 2014. This was followed by postdoc positions at GEOMAR and the Environment Department at the University of York, UK, where she worked particularly on the inorganic, biological, and marine iodine cycle. In 2018, she returned to GEOMAR in Biological Oceanography, where she was responsible for setting up a biological continuous measurement system to decipher the dynamics of organic matter production and decomposition in the coastal Baltic Sea. She joined GERICS in 2021. Her work has been published in numerous scientific papers.